SUMMARY
A group of people are lured to the same downtown Los Angeles bar by an ex-girlfriend they all have in common. She’s beautiful, conniving — and downright insane. But now she’s got one last surprise for them.

END_OF_DOCUMENT_TOKEN_TO_BE_REPLACED 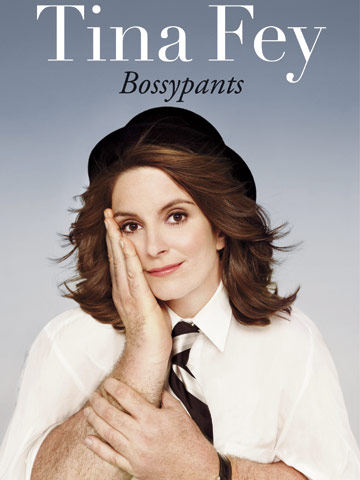 
Before Liz Lemon, before “Weekend Update,” before “Sarah Palin,” Tina Fey was just a young girl with a dream: a recurring stress dream that she was being chased through a local airport by her middle-school gym teacher. She also had a dream that one day she would be a comedian on TV. She has seen both these dreams come true. At last, Tina Fey’s story can be told. From her youthful days as a vicious nerd to her tour of duty on Saturday Night Live; from her passionately halfhearted pursuit of physical beauty to her life as a mother eating things off the floor; from her one-sided college romance to her nearly fatal honeymoon — from the beginning of this paragraph to this final sentence. Tina Fey reveals all, and proves what we’ve all suspected: you’re no one until someone calls you bossy.

END_OF_DOCUMENT_TOKEN_TO_BE_REPLACED

Hello, My name is Anna and I’m a TV-aholic.

When someone I’m just meeting asks me to tell them something interesting or unusual about myself my usual response is “I watch an extraordinary amount of television”. Some people may be a bit embarrassed by the amount of television I watch, others don’t believe me at all.

On average I watch roughly 3-4 episodes of various television a day. That could be in newly airing episodes, or re-watches, or made for TV movies. On the weekends, that number greatly increases. I’ve been known to watch a season or so of a TV show (usually about 22-25 episodes) in 24 hours. If every TV show that I watched was airing one new episode for one week, I would watch about 25 different shows in one solid week. That’s a lot of story lines to keep track of and a lot of time invested into some shows.

For some shows I continue to watch purely because I’ve already put so much time into them. I can’t seem to get rid of watching the show. In some cases, I don’t even have any emotional attachment to any of the characters or the story line anymore. Instead, I’ll binge watch it on days that I’m sick or feeling particularly annoying.

On the other side of the spectrum, I have shows where I am so emotionally attached to the characters and story lines that when they go on hiatus, I start a countdown to the new episodes. Ones where with every episode the writing gets better, the acting gets better and the over all storytelling gets better.

When I talk about television with someone who doesn’t know me, most of them get this concerned or apologetic look in their eye. I have to actually remind them that this is my choice. I don’t ignore my family to watch my shows nor do I neglect any housework that needs to be done or let it interfere with my day job.

TV and My Relationship

Sometimes, when I get home I like to pull up an episode of How I Met Your Mother and try and spot the similarities between the Lily/Marshall marriage and my own (Not compare them, that would be crazy, just enjoy the fact that there can be similarities). Other times, I introduce my husband to shows that I think he’ll love and visa versa. Sometimes it doesn’t stick, others he and I can have in depth conversations about. Going into detail about how a story played out and what we didn’t understand from the episode. We can have arguments and talk about why we love certain characters or hate others. Where I tend to gravitate to shows that have a focus on people and their relationships, he prefers to watch shows that suck you into the story.

Television can sometimes be portrayed by a mindless activity that you do when you want to waste a day. I disagree. Sure, there are some shows that create standalone episodes every week with just a dusting of a full season arc. In these instances you could watch episodes here and there and be able to keep up. There are other shows that if you blink or look away for a second, you’ll miss something incredibly important. Ones that keep you on your toes and keep your mind actively trying to see if you can figure out who the killer/cylon/troubled person/villian/hero/heroine/love interest is before the main characters do.

With some time, I hope that the stigma put on those that like to watch TV fades. Television isn’t the worst thing your child, friend, spouse or neighbor could be watching. There are things to be learned from television, there are interesting characters to be explored and new lands to discover. Just grab a remote, and start.

all gifs from various tumblrs

Currently`
Reading: Is Everyone Hanging Out Without Me? (And Other Concerns)
Watching: 30 Rock` Season 2
Listening To: Skyway Flyer by Jason Munday

This year however, I want to create some realistic resolutions. It’s only going to be a few, so that I don’t feel overwhelmed, and I’ll actually believe that I can attain it.

If you followed me at my old blog , then thank you for following me here. I needed a bit of a change so here it is.

For those who are just meeting me, allow me to introduce myself with a few random facts. (:

First, my name is Anna Gailey. I’m 28 years old and residing in Utah with my husband and three cats (Aerith, Rikku and Wicket). My days, though primarily uneventful, are usually filled with reading, playing video games with my husband, or having TV or movie marathons for no other reason than to step out of my head for a little while.

I watch an extraordinary amount of television and have absolutely no shame in that fact. And find that when I watch a new show or even do marathons of my favorites, I take something different from them each time. Once I ran a TV review blog called The Weekly Enthusiast, it has since fell to ruin in my inability to maintain that blog and a new job that I received around the same time. So don’t be surprised if I bring some things from that old blog to this one. I’m the kind of person that wants everyone to enjoy the shows that I enjoy, if you ever need recommendations for shows, I’m your girl.

I’m also surprisingly crafty. Most of my crafts have a nerd or geek theme, but I am just so proud of them. I’m always looking for new craft ideas to try/steal. Most of the time my crafts tend to be ones that I have to sew since anything requiring actual tools kind of freaks me out. The idea of metal stamping has been intriguing me for a while so I think that my be my next big adventure in crafting.

I enjoy writing, and have participated in National Novel Writing Month for the past 4 years, and actually completed it twice. Primarily, I write romance and chick-lit because that’s what I like to read. I tend to stick to authors that I’ve read and loved for a long time and bring in new authors rarely. This is something I’m trying to work on.

Finally, I am an unapologetic gif harlot. I collect those things like they’re Pokemon, and tend to include a lot of them in posts. I’m a massive geek, nerdfighter, and beyond huge fangirl. There will be flailing on this blog, I just can’t control it.

Now about the blog, the title of this blog is Sing me a Story; Sing me a Rhyme. I don’t know how many people remember the short lived kids show called “Sing me a Story with Belle” but I adored it and the theme song has always played in the back of my mind.

This song seemed like a good theme for a new blog.