My Funko collection is growing. Basically anytime any of my favorite stores have sales, I end up buying a good handful (probably more than I should) of new Pops to add.

A few weeks ago, I swung by FYE and picked up a Dancing Groot Pop [Affiliate Link] and a Crowley Pop[Affiliate Link]. I was excited to finally start expanding my Supernatural collection. I got home and set the figures down only to get distracted for a couple days before I could pull them out. After tossing the bag and setting the boxes on my desk I went about my day organizing my shelves to make room for the newest additions. I was admiring the box and laughed when I noticed that in the picture, Crowley is holding a glass of something, but I couldn’t remember seeing that on the figure itself. After a moment I realized the reason that I didn’t notice it at first was because the figure I picked up, DIDN’T HAVE A HAND! Having already thrown away the receipt I didn’t know what to do. While I’m sure that some stores will exchange it, I wasn’t sure if with it being broken that I could return it. So instead, I decided to use this mishap to make something silly. 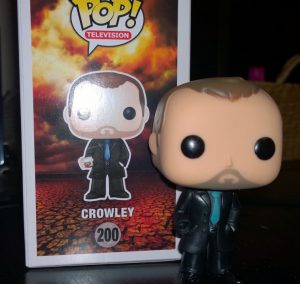 A short (and probably poorly thought out) story about how Crowley could have lost his hand.

Here is what I came up with:

“Oh Sam. You know how this always turns out. Why do you insist on repeating this boring charade?” Crowley said slipping a hand in his pocket and nursing his drink with his other. He took a small sip, letting the liquid slip down his throat and feeling it pool in the bottom of his stomach. It wasn’t like he could get drunk really, he wasn’t really alive. But he still nursed his scotch as if he were. As if it still affected him the way that he sometimes wished it would.

Sam stood across from him and Crowley could see the hate in his eyes. Hate radiated from Sam in waves only making Crowley feel more superior. If this were a cartoon, we’d be seeing steam come out of Sam’s ears and nose.
“Where. Is. My. Brother!?” Sam punctuated every word with a step closer.

Crowley didn’t move. Dean was most likely at a karaoke bar close by making all the people who chose to go to that bar tonight wish they had never heard of karaoke in the first place. While Crowley was glad he couldn’t get drunk, he admitted that watching Dean get fake drunk was as entertaining as his life got at the moment.

He shrugged and took another sip of his drink, hearing the ice clink against the side of the glass signaling that it was time for a refill. Sam still seethed as he stood a few steps away from him, his shaking hand gripped around his trusty demon killing knife.

“So help me, if you don’t tell me where Dean is, I will make your life a living hell! I want my BROTHER.”
“Sam, I already live in hell. I’m the king of Hell. Remember.” Sam roared in anger, took a step closer and swiped down at him. With a sigh, Crowley stepped out of the way with ease and shook his head.

“Sam, what do you think you’re going to accomplish? If you kill me, I can’t tell you where Dean is.” Crowley smiled at Sam, which only seemed to make Sam more upset. Crowley delighted as Sams face reddened with frustration and he took another running leap at him. Adding a bit of flair to his evade technique Crowley bowed out of the way spreading his hands to the side of him.

“Yet another miss, Wincheste—-” There was pain. At least, that’s what he thought he felt. It was a feeling in such a rush that he wasn’t really sure what he was feeling. It all became clear when he heard the shattering of glass against the concrete. Looking down, Crowley saw his hand that had once cradled his drink now on the floor. Why he wasn’t dead was a question for another time, at the moment, he just had to figure out how to get out of here without losing another limb.

Spinning around and facing Sam who now had a satisfied grin across his face, Crowley could feel his own anger bubble up inside him.

“You made me spill my drink…”

Last night I wrote a story about how @originalfunko Crowley could have lost his hand. It’s super silly. http://wp.me/p4aJet-eC

This was silly and a story I wrote about half an hour before I went to bed, so keep that in mind. Other than that, let me know what you think. Do you have another idea as to how Crowley could have lost his hand?