Guys, E3 has been killing it this year. And I am super stoked for games coming out. I keep singing this song as I watch all the conferences. So it’s not surprise that this week’s Thursday and Thrilled features a lot of E3 announcements.

I just finished Royal Wedding* (review coming) and finally started Since You’ve Been Gone* book. I’m in LOVE with it. Emily is shy and sweet and I adore the flashbacks between present day Emily and past Emily with Sloan. I like that the relationship between Frank and Emily seems pretty natural and doesn’t overshadow her friendship with Sloane.

My soul sister Angel has posted several posts about #WeNeedDiverseBooks. It pains me to say that I don’t know that I own a single book that has a character that isn’t white/hetero/general norm as a primary character. As a writer I feel that it’s very important for everyone to read books with diverse characters or by diverse authors to better understand how to write them in an inoffensive way. I’m going to make an effort to seek out books that are either written by or starring (that’s the right word, right?) a character or author that is more outside the box than normal. I can’t be a good writer for those who fit in that category without expanding my own knowledge. 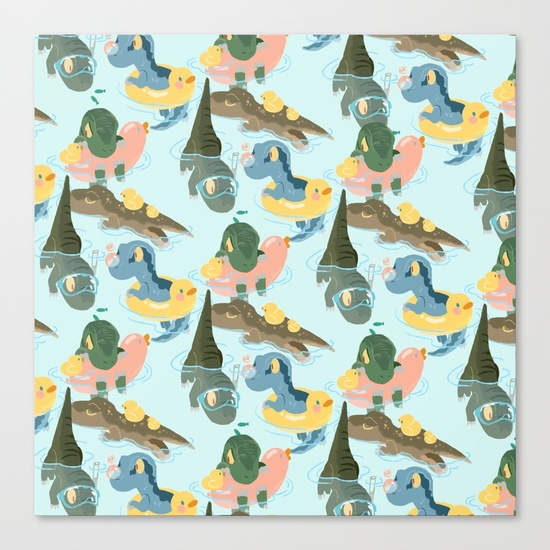 I need a dress or something made out of this fabric RIGHT NOW!! This artist has some adorable art on their page. I want to order them all. But specifically the raptor stuff from Jurassic World.

WARNING: MAJOR FANGIRLING ABOUT TO OCCUR!!!

Horizon Zero Dawn
THIS. GAME. Oh my hell, it looks FREAKING amazing. Not only does it seem like some weird hybrid of Merida and Ygritte (which I am COMPLETELY on board with) but they’re hunting dinobots!! Like, how could this not be an amazing game. The graphics look incredible and the gameplay seems very similar to Tomb Raider: Definitive Edition

Yoshi’s Wooly World
With all the first person shooters and third person adventure puzzle RPGs getting their eleventh sequel its nice to see that Nintendo still corners the market on games that a family can play that doesn’t involve a head shot to survive.

World of Final Fantasy
Or as the Husband calls it Final Fantasy: Funko Edition (as if that’s supposed to make me NOT want to buy it). It’s a bit strange to be considered part of the Final Fantasy series, but I’m excited for it nonetheless.

Rise of the Tomb Raider
Remember how I was just talking about games on their eleventh sequel and adventure puzzle RPGs? This is my chosen poision in that genre. I beat the first (Tomb Raider: Definitive Edition) a few months ago and have be bouncing waiting for the new one to come out. Despite it being released on the XBox One first, I’ll bide my time until it releases on the PS4.

Kingdom Hearts III
OMGOMGOMGOMGOMGOMGOMGOMG!!!! I have been waiting for this release to come out for YEARS!… YEARS and while my friends and I are still speculating who the characters are in the video playing chess (my guess is Master Eraqus and Master Xehanort from Birth By Sleep, or maybe one of their decendants?), I’ve watched this trailer at least 10 times trying to pull any new information from it. Of course, SquareEnix hasn’t come out with a release date because that would be WAY too convenient /isn’t bitter.

Final Fantasy VII: Remake
Really the biggest announcement so far has been the remake of Final Fantasy VII. It’s easily one of the most iconic Final Fantasies and absolutely one that everyone should play. After releasing Final Fantasy Advent Children rumors spread quickly of a remake, and this year the rumors were proven correct. No release date, but I’m super stoked to see the gang in better graphics. (also, SquareEnix do me a favor… don’t screw it up? okay? kthnxbye)

What are some things you’re excited about this week? Feel free to link back to a similar post you do (if you do anything similar to this). I’d love to see what you are excited for!