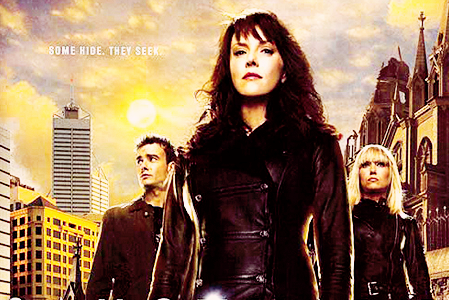 The enigmatic Dr. Helen Magnus recruits an insightful forensic psychiatrist Will Zimmerman to join her in the quest to track, study and protect the strange, and often terrifying creatures that secretly populate our world. (From IMDB.com)

This show walks the fine line between science fiction and supernatural fiction. While I sometimes have a hard time with the distinction, the reason I feel that this show belongs more on the science fiction side of everything because Helen tries to enlighten Will’s mind primarily with science. Explaining how evolution and humanity as a species have grown to paranormal and supernatural beings. She’s a character that believes in science, but also believes in the magic of the world.

When it first made its way into the public it started as a webseries, just as Amanda Tapping finished up her role on Stargate (that being said, try to get past her bad wig in the first episode), people jumped at the idea so quickly that SyFy quickly picked it up as a series.

The series has a great way of taking history and tweaking it to its own advantage. You’ll hear Helen tell stories of historical events in a way you have never heard before.

Additionally, this show is almost entirely filmed on green screen. In some places it’s completely obvious, while other, I’m shocked when I find out that its green screen and not a hallway they’re walking down. If you watch it for no other reason that to see that phenomenon, I see no flaw in that.

It walks the line. I define it as Science Fiction, but others may not.

The Romantic
Oh the ships to ship. There are many that cross paths with the crew of the Sanctuary that have the potential to be something more. Some show up from Magnus’ past, others are Will’s colleagues. But mostly the relationships that could be between the employees of the Sanctuary itself are the ones that I always wanted. Helen Magnus is “very eccentric and very sexy and very unapologetic” (so spoken by Amanda Tapping herself), so I find it difficult to decide who I’d rather have her romantically attached to, as if she needs to anyone at all.

The Familial
With everyone living under the same room, there is bound to be some family like interactions. As the leader of this Sanctuary, she becomes kind of a mother hen to all under her employ. Will, as the older brother who just wants to be considered a grown up. Henry, the younger brother with his gadgets and gizmos. Ashley and Kate, the rebel daughters. Biggie, the scary uncle who is really just a big softie. Finally, John, the absent and sometimes terrifying father who pops in and out at a moments notice

Why You Should Try It:

If you enjoy shows that turn history a bit berserk. You’ll like this show. If you want to watch a show with a very strong and sometimes unyielding female character this show is for you. If you want a show that walks the fine line between Science and Fantasy, his show is very much for you.

How Long Should You Give It:

Once again I say give it a full season. Most shows I’m going to suggest you’ll be hooked after a season.

Where to Find It: