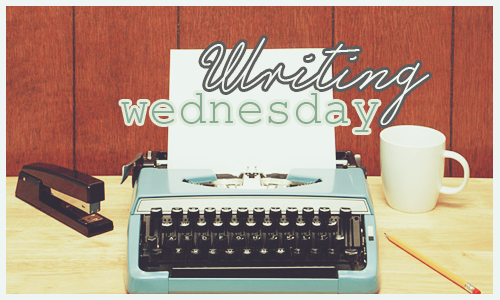 Currently`
Reading: Dorothy Must Die by Danielle Paige
Watching: Parks and Recreation ` Season 3
Listening To: All About That Bass by Meghan Trainor

In an effort to keep my writing skills up to par and to keep up on blogging, my friend Nicki and I have decided to do a prompt fueled Wednesday every couple of weeks that we’re calling “Writing Wednesdays” (yay alliteration!!)

Here is how it works: This will be a semi-monthly feature here and at Nicki’s Blog. On the first and third Wednesday of every month we’ll post a prompt that we’ve either found or thought up ourselves along with our drabble for said prompt. Anyone and everyone is welcome to join in, all we ask is that you link back to one of us on your own Writing Wednesday posts.

Also, be sure that you comment on this post with a link to your own post so that everyone can check out the other blogger’s stories.

PROMPT: There Was Too Much Dust

The first thing I heard was the creaking of the floorboards under someone’s weight. It was a slow groan that echoed through the rest of the house. I half expected the culprit to call it in and return to where he or she came from. Alas, I was not that lucky.

Soft whispers carried down the corridor of the long emptied house. Shushing and whispered yelling followed as the intruders began making their way into my house.

I had visitors often. It wasn’t my choice. It seemed that the local youth thought it would be funny to test their bravery by going into the deserted Isaac’s house. Not caring that someone actually lived here.
If you could call what I do living.

I let out a disgruntled sigh and stood from the chair I had been seated at in my room. Soundlessly I walked across the room toward my door watching as the beams from the intruder’s flashlight blinked across the doorways.

They wouldn’t see me. No one ever saw me.

“Lydia.” A female voice cracked, terror obvious in the sound.
“Shhhhh!” a second and more confident female voice quickly replied.
“Lydia. I don’t think we should be here. It’s giving me the heebie jeebies.” As she spoke the light in the hallway outside my room shook.

But it wasn’t just a house. It’s never just a house.
I peeked around the door frame of my room toward the light at the end of the hallway. The outline of two figures shown behind the lights. One figure stood tall and seemed to be bouncing with excitement, while the other was hunched around her flashlight looking as if she were ready to drop it and run out at any moment.

“Jen, do you know the story of this house?” Lydia asked, pointing it at her friend causing her to jump and back up against a wall. Jen just shook her head her mouth opening and closing with no words coming out.

Lydia let out a giggle that sent chills down even my spine and held the flashlight against her chin in the classic scary story fashion.

“A long time ago,” Lydia started.
“Actually, it was just a few years ago, but whatever,” I corrected her, talking only to myself as I continued to spy on the intruders of my home.
“A young man, of about 20.”
“21.” I corrected again.
“Named Henry Isaacs lived in this house with his parents. One day, Henry and his parents were driving down a country road on their way to visit a relative in a distant city when Henry realized he forgot something very important back at home…” Lydia continued with the story.
“What did he forget?” Jen piped up, now pulled into Lydia’s web of storytelling.
“He forgot his grandfather’s pocket watch. You see, Henry never went anywhere without it, it was like a security blanket for him. So, it was very important for him to have it.”

I gulped down a boulder in my throat. This was unlike any version of the story I had heard from previous intruders.
Primarily because so far (with the exception of how long ago it was and my age), it was correct. I looked back at the chair I had risen from, on the table next to it was a pocket watch. One that was covered in a thick layer of dust.

“His parents turned around, knowing how important this pocket watch was to him. On their way back, they were pushed off the road and into a frozen lake. The only person who was able to be pulled out of the water was Henry.”

I could feel myself shaking as I listened to the story. The walls in the house creaked as I continued to listen to Lydia tell the story. Tell my story…

I heard the floorboards creak again as the lights got closer and closer to my room. Lydia continued with her story as she she approached.

“Henry was unconscious for three months.” She continued, now standing in the doorway of my room. I stood in front of the girls as they glanced around the room. The girl, Lydia, looked right at me, took a deep breath and stepped right through me.

“After three months, Henry passed away. But it’s said he still resides in this house, just trying to get his pocket watch.” Lydia touched a finger to the brass pocket watch on the table. Wiping the dust from it to reveal the inscription.

To Henry.
For times when you think time isn’t on your side. Just know, I always will be.
Love, Grandpa.

I screamed for her to stop touching it.
But they didn’t see me. No one ever saw me.
There was just too much dust.

The prompt for next time will be: First Line- “It was the only road out of town but in retrospect, taking it was a terrible decision.” on September 17th.
You can find Nicki’s post here.

Please leave comments, future ideas and links to your own posts below! We’d love to see what you come up with.